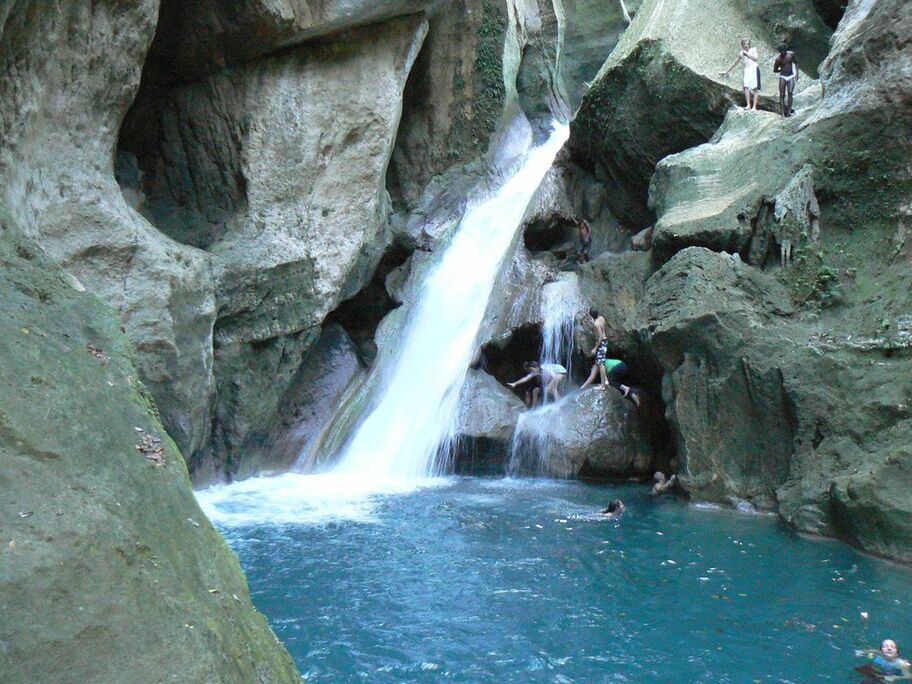 Like Tracy Kidder's book title rightfully says about Haiti, There are "Mountains Beyond Mountains" and that is part of her beauty. So are her bluest waters and her most exhilarating water falls. This is Bassin Bleu (blue basin) in the town of Jacmel.

Haiti, once called the "Pearl of the Antilles", is now simply known as
​"The Poorest Country in the Western Hemisphere".
This has become her identifier, her tag line. Though it is true, it is however painful to hear everyone repeating it without any idea why it has become so. It was not always like this. As the former Prime Minister of Jamaica, P. J. Patterson said: "Haiti did not jump; it was pushed over the precipice." She was shunned at birth, isolated by the colonial powers of the time, afraid that she might export her audacity of freedom to their colonies. Haiti was, and still is, a country  rich in natural resources, including gold,and some say even oil.

From being an exporter of tropical foods such as coffee, rice, sugar, banana and other tropical fruits, Haiti is now hardly producing enough to feed her people, let alone to export. She has become an importer of these foods and other basic necessities, mainly from the United States and even more so from The Dominican Republic, her contentious neighbor to the East which mistreats her people and even passed a law stripping Dominicans of Haitian descent of their citizenship. These Dominicans have in fact become people without a country.

Haiti's people has become her most valuable resource. This has spawn a cheap labor opportunity for many foreign companies that pay about $1 a day to a readily available pool of hard workers, mostly women laboring long hours under sweatshop conditions manufacturing goods, from designer clothes to sporting goods, for the middle class to upper class American market.   .
​
Haiti is a country of majestic mountains, beautiful valleys, huge caves, and large expanses of the bluest water in the Caribbeans. It is a country with natural beauty, a vibrant culture, gifted and creative artists, and talented artisans.
According to the latest census, the population of Haiti is about 11 millions people the majority of whom, 60%, is under 35 years old. The women comprise 51% of the population, and the men, 49%. French and Creole are Haiti's  official languages. 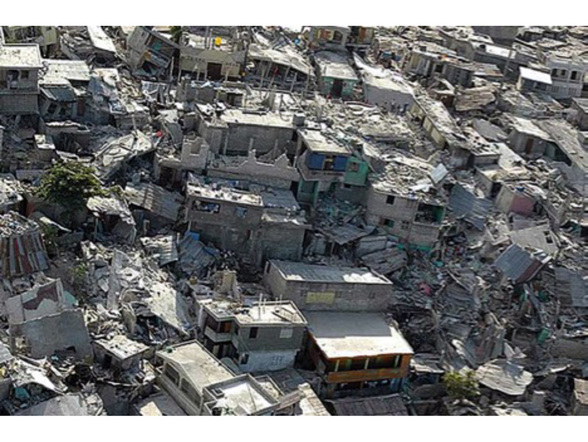 Haiti is a Christian country with the Roman Catholic Church being the majority denomination, and  Protestant Churches of various denominations being in minority. In recent years, the ratios have changed dramatically with the percentage of Catholics decreasing, and that of Protestants increasing. The Vodou religion is also widely practiced, and there is a considerable measure of overlap between professing Catholics and those practicing Vodou.

At the time of the earthquake, the population of the metro Port-au-Prince was 1,728,000 people, a density of 73,434 people per square mile. No longer able to support themselves by working the land, the farmers, men and women, flocked to the capital and its suburbs in search of a job in the sweatshops even though the pay was often no more than a meager $1/day and the labor slave like, in some cases up to 70 hours a week without a day off. This in part explains the reason for so many casualties during the earthquake: a very large number of people packed in substandard dwellings.
​
Haiti's very existence is a 216 years struggle. Political instability, often fomented by foreign powers for their own purpose, while pretending to promote democracy, has been the norm from the beginning and still is even today. Dictators such as the Duvaliers, father and son, were supported, and democratically elected presidents, such as Jean-Bertrand Aristide, were overthrown.

Look at the next two pictures: the Runaway Slave (negre marron) and the National Palace (palais national). They are from different times but in their own way they symbolize the very essence of this struggle. 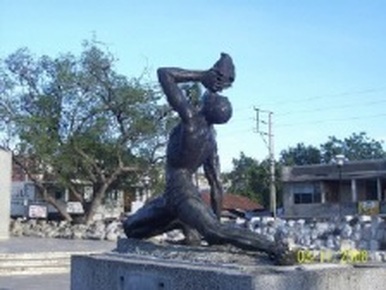 he Runaway Slave symbolizes the yearning of the slaves, brought from Africa to replace the vanishing Indian population, to be free. "Liberty or Death" was their cry. Just as the Jews in biblical time, and even today, used the Shofar to round up the people, the slaves used the conch shell to announce the call to arms. "Decapitate, Burn Down Houses" (coupe tete, boule kay) was their war cry.

They organized themselves under the leadership  of such heroes as Boisrond Tonnerre, Toussaint Louverture, Jean-Jacques Dessalines, Alexandre Petion, and Henry Christophe, and defeated the mighty army of Napoleon Bonaparte to earn their independence and make history by giving birth to the first black independent nation in the world.

In doing so, they offended the French and the other slaves owning powers of the time who resolved and conspired to isolate Haiti and prevent the spread of their "bad example" throughout the Caribbean, Latin America, and the United States. Haiti was required to pay to the French which they defeated on the battlefield, reparation of 150 Million Gold Francs, a billions of dollars fortune in today's money, in order to be admitted in the community of free nations.  It took the United States  58 years to recognize Haiti as a free and independent nation. In a sense, Haiti, 216 years later, is still paying the cost of its audacity of freedom.  She never had a chance.

The National Palace symbolizes the seat of power and national pride. However, it is also a symbol of Haiti's tumultuous politico-economic history, including the intrusion of, destabilization and occupation by, foreign powers  from  the first president, Jean-Jacques Dessalines violently assassinated, to the former president, Michel Martelli, a singer and band leader turned politician whose term ended three years ago. He left without proper elections to chose a new president, plunging the country in a political crisis with the head of the Senate being named the interim president charged to organize national elections and sit a new president. It did not appear that he would be able or willing to do that. However, while the chaos continues and the people continues to suffer, elections did finally take place and a new President, Jovenel Moise, a protege of Martelli, member of his political party,  took office in February 2017 for a 5 years term. There is some opposition to certain actions he has taken thus far. It seems that his budget requires that the working class pays a large increase in taxes, while the upper class is given a big tax break. It remains to be seen how things will turn out. there has been a lot of unrest, especially when it was announced that the price of the government controlled gasoline was going up. People took to the street, rioting, blocking many main streets, and burning many edifices, especially private businesses which they believe were in co-hut with the government. The announced increase was rescinded and a uneasy peace was reached. However the Prime Minister was forced to resign and the search of his replacement conjures the possibility of further unrest. One of the former presidential candidates was nominated to be the new Prime Minister. After two weeks of political unrest and violence in what was called "peyi lock" (country lock down) which plounged the pays in total chaos and earned a "no fly" designation from the United States State Department, this Prime minister was forced to resign. Again there is a interim PM, and the process starts all over again. Meanwhile, gangs of bandits have taken control of many parts of the country and are terrorizing the people with the police unable to stop them. Rumors have it that these gangs are being armed and financed by some members of the parliament for their own purpose.  The situation has gotten even worse in recent months. Schools were not been able to open as scheduled in September, but have since opened. There is still no official government, and the chaos has continued into the new year. 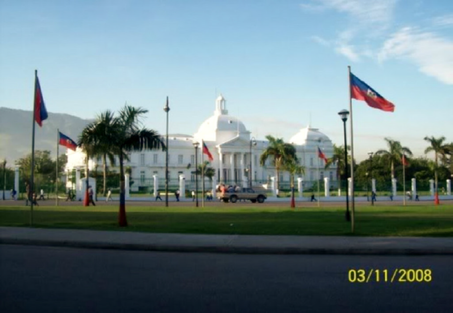 The current palace damaged beyond repair by the January 12/2010 earthquake was one of the many national palaces destroyed by fire or explosion as the residing presidents were killed, starting on 12/19/1869 when the former imperial palace was destroyed during a revolt that brought down the government of President Sylvain Salnave, until 1915 when the sitting president Vilbrun Guillaume Sam was assassinated and the latest National Palace designed by the Haitian Architect Georges Baussan in 1912, was set ablaze during construction.

The American occupying forces took possession of the palace, and American naval engineers oversaw its completion. The building was finished in 1920. See below what it looks like after the January 12, 2010 devastating earthquake. 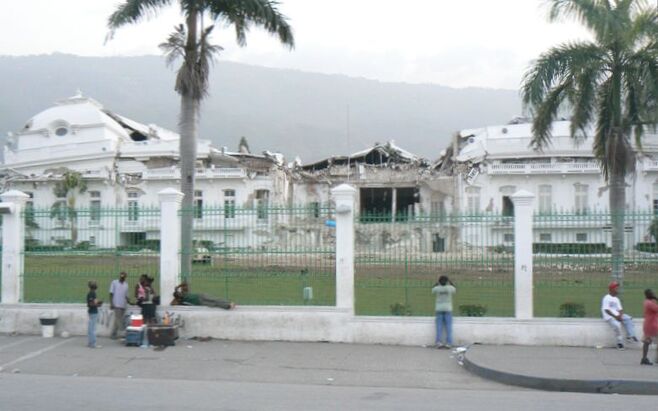